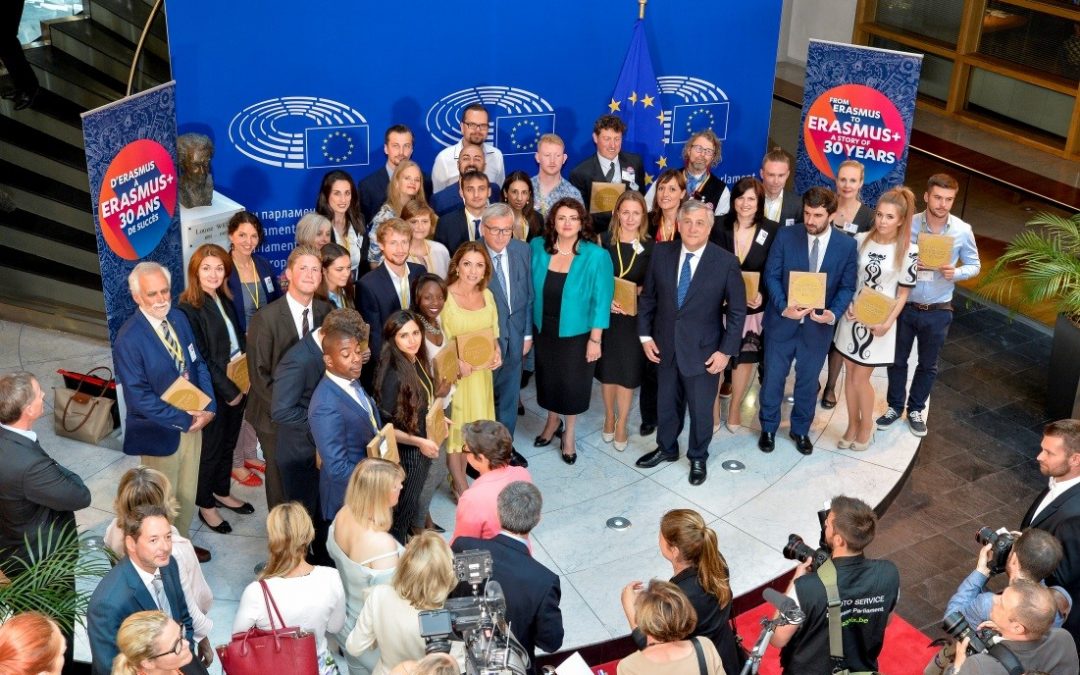 The European Parliament celebrated on Tuesday, June 13th 2017, the 30th anniversary of the Erasmus program. First launched in 1987, the program has provided scholarships to nine million participants across Europe up to now.

The Official Ambassador for Greece in the framework of this event was Nicolas Pallikarakis, Professor Emeritus at the University of Patras and Head of the Biomedical Technology Unit (BITU), who received an award for his long and important contribution in the development of the Erasmus Programme at the University of Patras, mainly in the field of Biomedical Engineering Education.

His experience with the Erasmus program started back in 1989, when the European MSc Program on Biomedical Engineering was created at the University of Patras, Greece. This program resulted from a common European initiative of the so called Concerted action on Biomedical engineering (COMAC BME) active at that time at the European Commission, aiming to create a program with teaching staff from more than 20 European Universities and open to students from all over Europe, based on and taking advantage of the then newly established Erasmus program. The curriculum of the program and teaching staff assignment were agreed in a consensus based general assembly meeting in Patras and the first students enrolled in September 1989.

The program was innovative in terms of its collaboration approach, as through the numerous bilateral agreements that were signed with Universities from practically all over Europe, mobility of both students and teachers was encouraged and gave the program its unique multicultural character. Additionally, this Program was among the first to apply the European Credit Transfer System (ECTS), as well as the first one to be officially recognized by the Greek State as a Joint Program in 1994, since it was implemented by the University of Patras in collaboration with the National Technical University of Athens.

For the 25 years that it lasted, more than 600 students attended this BME program, half of whom were coming from abroad. Some of them followed academic career and are today Professors in EU as well as in USA Universities.

Collaboration between European Universities became even closer with the occasion of two more recent TEMPUS IV projects that were coordinated by the Biomedical Technology Unit of the University of Patras during the last decade. The first one, CRH-BME (Curricula Reformation and Harmonisation in the field of Biomedical Engineering), established a generic curriculum for BME studies that took into consideration recent and future developments but also the necessity to provide similar knowledge to BME students all over Europe in order to facilitate studies and professional recognition, staff exchange and student’s mobility. The second one, BME-ENA (Biomedical Engineering Education Tempus Initiative in Eastern Neighbouring Area), was based upon knowledge transfer from EU Partners to four Eastern Neighbouring Countries (Armenia, Georgia, Moldova and Ukraine) and aimed to promote, establish and improve BME Education in this ENA region, through the creation of four joint multidisciplinary MSc BME programs. The program was successfully completed last month and all programs created are accredited and the first alumni received already their degrees.

“This extremely long Erasmus experience allowed me to expand my academic career, broaden my horizons, visit many countries, get in touch with new people and work closely with colleagues from many different countries, many of whom actually became my friends over the years”, said Nicolas Pallikarakis. “In addition, I had the chance to meet some brilliant students who visited Greece for their Erasmus studies and later on became core members of my research team.”

The next goal is to promote harmonisation of BME studies between Europe and Latin America. Hopefully, the proposals submitted under the new Erasmus+ call will be approved and European colleagues will be given the opportunity to work with their Latin American peers towards this direction.

Let’s hope that the Erasmus+ program will successfully run for many more decades and will continue to reinforce cooperation not only between Universities but also – and perhaps most importantly – between countries!